I have some fond memories of evenings spent with friends at the Territory Lounge, located next door to (and sharing the same kitchen as) Artist Point restaurant at Wilderness Lodge.  I loved that you were able to get some of my favorites from Artist Point, like their signature mushroom soup and berry cobbler dessert, in the more casual atmosphere of the lounge.  So when I heard about the upcoming change to Artist Point from a signature restaurant to a character dinner I was a bit concerned as to how that would affect the menu at Territory Lounge.  So even though I wasn’t all that hungry I decided that (with this being the last night of my stay at the Wilderness) I needed to visit the Territory Lounge to have the soup, for what I thought might be the last time.

But you couldn’t order food until Artist Point opened at 5:00.  I waited though until about 5:30 before I left my room and headed towards the lounge on the first floor.  There were some tables already occupied by guests but I was able to find a 2-top table next to the wall opposite of the bar.

I was given two menus, the first of which was their Cocktail/Bar menu.  This included a page which listed their Signature Cocktails…

I hadn’t really intended to order a cocktail, but these signature drinks really caught my eye.  There were two that I was especially interested in.  So I asked my server for her recommendation based on the type of cocktail I most enjoy…fruity and on the sweet side.  And this is what I ended up ordering…

Our Neighborhood with Don Q Rum and Blackberry Cordial, with a Strawberry Puree and Orange Juice fusion topped with their signature blackberries – $12.00

This was their version of the Kungaloosh, a popular cocktail which was served at the Adventurer’s Club on Pleasure Island before it closed in 2008.  Here are two recipes which I found online for the Kungaloosh…

New Kungaloosh Recipe — since 2000 or so

Toss it in a blender with enough ice to make it slushy.

The Kungaloosh (both the old and the new recipe) sounds like it would have been right up my alley so I’m sad I never got to try it.  But I was happy that I got to try the Our Neighborhood at Territory Lounge because I really enjoyed it.  Since it was light, fruity and sweet I drank this way too fast and could have easily drank another.  However with a price tag of $12 (and no 20% Tables in Wonderland discount for me on this trip), I refrained and stuck with the free water.

Ok, now on to their Food menu…

And a closer look…

With the toppings of the nettle pistou (the green blob), the salsify (the root vegetable shavings), and sunflower seeds, this was a little different than the previous versions of this soup that I’ve had several times before.  While I didn’t think the pistou or salsify added anything special to the soup’s flavor, I didn’t mind the crunchiness texture that the sunflower seeds brought to it.  And thankfully the soup itself tasted the same as always…DELICIOUS!

Though you might not be able to tell, the portion size of the soup was not very big.  Consequently I felt like I had room for one more of my old favorites.  I first thought of the Artist Point cobbler, which I’ve always loved, but changed my mind when I inquired about its availability after the menu changes for Artist Point went into affect in December.  I was very happy to learn that Territory Lounge would continue to serve all of my Artist Point favorites once the restaurant changed to a character meal.   So with this reassurance and knowing that there would be many desserts in my future that evening (as I was attending the After-Fireworks Dessert Party at Magic Kingdom), I decided to instead order this favorite from my visits to the lounge with my friends in the fall of 2016…

These are soooo good!  Probably the best truffle fries I’ve had.  Just as before, they were perfectly crisp (but not greasy) and perfectly seasoned.  And not only are they fried in truffle oil but there are actually thin slices of truffles (mushrooms) mixed in with the fries, as you can see in the photo below… 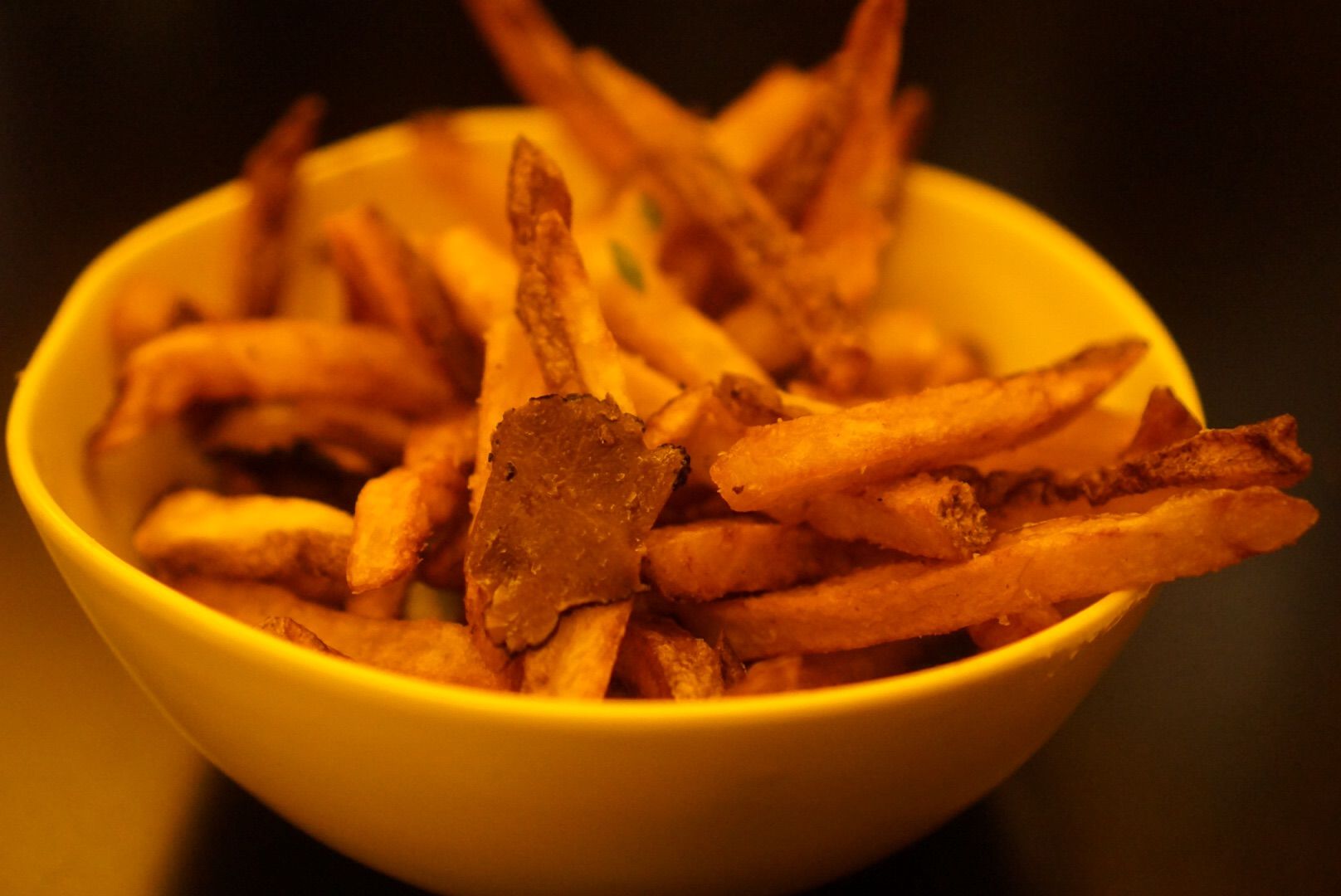 This was a pretty large serving, definitely enough to share.  I wish I had someone to share these with because I hated leaving so many behind uneaten.

Whenever I stay at Wilderness Lodge, a visit to the Territory Lounge is a must-do.  As of now though, the plans for my next trip in fall of 2019 do not include a stay at the Wilderness Lodge.  However, I still might have to take a boat over from the Contemporary for a visit if I can squeeze it into my ever-growing Dining Wish list.  Then again I might instead try the character dinner at Artist Point for a new dining experience.  Decisions, decisions.

And so, that just leaves the ratings and rankings.  While Yelp reviewers gave Territory Lounge 4 stars, those on Trip Advisor gave it 4 1/2.  And I would agree with the 4 1/2 star rating.  As for its ranking, it was ranked as #369 of the nearly 3,000 Orlando area restaurants reviewed on Trip Advisor.  Narrowing it down to just the Disney World area, it ranked #102 of about 250.