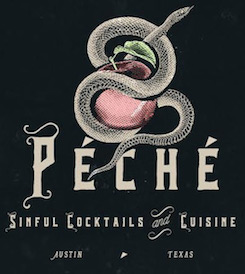 My daughter was intrigued by the idea of us drinking “sinful” cocktails so she made a reservation for us to have dinner at Péché, located at 208 W 4th Street.
We arrived on time for our 6:30 reservation and were seated at a table for 4.  Then we were asked to change tables because they were needing our table to push together with other tables to accommodate a large party, which actually didn’t show up until 8:00 when we were almost done.  The new table we were assignedver was very small (too small for the 4 of us) and wobbly.  It was very annoying and not a good way to begin our dinner here.
Here was their absinthe cocktail menu…

My sister and daughter ordered absinthe cocktails, both choosing the Pop Tate (pictured in the back).  This had absinthe, root beer, orange juice, orgeat (sweet syrup made from almonds, sugar, and rose water), and egg white.  This was recommended by our server as an absinthe cocktail that was sweet.  They both said this was just okay and that they probably would have enjoyed it more if they liked black licorice.
From the Whiskey cocktail men, my niece had the Fig Manhattan (pictured in front) with rye, sweet vermouth, housemade cherry, vanilla bitters, and topped with fig foam.  She said it was sweet and delicious.

Then because it was still Happy Hour ( from 4 – 7:00 p.m.), many of their Snacks (those with an asterisk *)  were half the price listed on their menu…

Mushroom Fritters with herb sour cream (1/2 price during happy hour – $4.50)
I thought I would love these, but they were just okay.
My daughter doesn’t eat mushrooms, so she had this…

Mac and Cheese – Gruyere, Grana Padano Cheeses, and Tasso Ham (something green on top, maybe minced broccoli??)  – 1/2 price or $7
She said this was very good.
Since I didn’t order a cocktail, I decided to splurge and order this just for me…

Classic French Onion Soup (1/2 price during happy hour – $6.00)
The broth lacked flavor, could have used more salt or seasoning.  It had a baguette slice on top that was difficult to cut and eat.  I prefer croutons.   So really the only good thing is that it was 1/2 price during Happy Hour.  It is definitely not worth $12.00!
Now for our entrees…

My daughter chose the…

Braised Short Ribs with Duck Fat Mashed Potatoes, Wild Mushrooms and Jus
As I said earlier, she does not eat mushrooms so I was surprised she ordered this.  She ate around the mushrooms and said the rest was good.
My niece chose this entrée…

Ribeye topped with Maitre d’hotel butter and served with steak frites (french fries)
She said the steak was tough and fatty. And they didn’t give her a sharp enough knife to cut it. The knife she was given was no sharper than a butter knife.   This entrée was not good and she left hungry.  Also, though she hardly any of it and refused the offer to take it home, she was never asked by our server how it was or if there was something wrong with it.
My entrée choice was the…

Croque Madame with House Cured Tasso Ham, Gruyere Mornay and topped with a Sunny Side up Egg and with Pommes Frites
From a different angle…

The fries and the egg were good, but the rest was just okay.  The bread at the bottom tasted like old, stale bread and was not good.  The good news though is that this was given to me for the Happy Hour 1/2 price of $9.
My sister had one of their Specials of the Day…

Pan Seared Tile Fish with a Lemon Herb Sauce and served with a mix of Cous Cous and spinach
She said this was good.
We all agreed though that this was our least favorite dinner of the 6 we had on this trip.  There seemed to be quite a few misses here and only a few hits.  With that in mind we rated our dinner at Péché only 3 stars.  This is far lower than the Trip Advisor rating of 4 1/2 stars (ranked #147 best of all Austin restaurants reviewed there).  And Yelp reviewers gave Péché  4 stars (ranked #85), so perhaps we caught it on a bad night in the kitchen.